Style.com Review
(Trying to step up my game a bit, I still wanna win. )

The Fondation Louis Vuitton, Frank Gehry's new masterpiece (in this case the word might be an understatement), was gleaming above the Bois de Boulogne in the October sun. In the Paris show venue stakes, Nicolas Ghesquière zoomed out so far ahead today, his fellow designers will be wrenching their necks to get a look. Ghesquière is used to being in the lead. His debut collection for Vuitton last March, his first after a year's absence from the runway, sent ripples through fashion that are registering this season with an industry-spanning 1970s revival.

His terrific show today began with a video clip of youthful faces speaking in unison lines that had been lifted and modified from the 1984 David Lynch film,Dune: "A beginning is a very delicate time…Day zero in the heart of the project, code-named GEHRY014…A ship surrounded by a gigantic woodland, a ship made up of 3,600 glass panels and 15,000 tons of steel, a ship that serves as an incubator and ignites our fellow creative minds…Oh, yes, I forgot to tell you, today, October 1, the LV house wants to explore the ability to travel to any part of the universe without moving. The journey starts here."

With an intro like that, not to mention the Close Encounters of the Third Kindlighting on the runway, it was tempting to think we'd get a return to high concept from Ghesquière. He did space-y collections at Balenciaga—see Spring '07, the season of the C-3PO leggings. But while a zip-front sweater and high-waisted cropped pants could double as a stewardess uniform on Virgin Galactic or some other spaceline of the future, the collection wasn't as out there as all that.

Quite the opposite: The cut of the clothes was designed to be familiar. Cue a navy blazer and cropped jeans worn with a white high-necked blouse, a fitted green sweater tucked into a mid-length black skirt with a high middle slit in the front and back, a straightforward peacoat. "No rupture with last season," Ghesquière said afterward. "It's still a wardrobe, it's about an instinctive mix." But undeniably it's a special wardrobe. If you think of his debut last season like an architect's early schematic design, this collection was more filled-in, with plush velvet pantsuits; densely sequined zip-front minidresses worn with thick, textured tights; and a sleeveless shift in an amusing print of makeup, household appliances, and muscle cars. And, of course, there was leather, pieced together in bright stripes on a shirtdress or, quite spectacularly, cut into thin strips and woven with metal rings in such a manner that a high-necked minidress almost resembled lace. Ghesquière may have embraced wearable design, but you'd better believe he understands how to make his work stand out. Take the heels that enlivened the boots here: colorful, plastic, and cleverly cut in the shape of the LV monogram flower.
Click to expand... 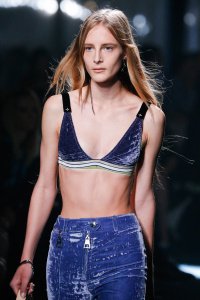 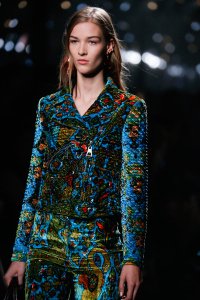 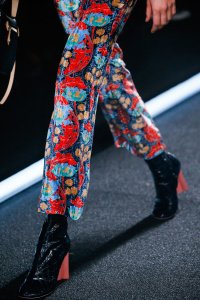 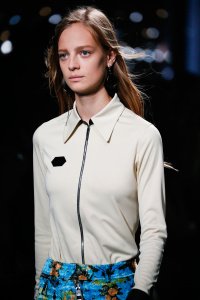 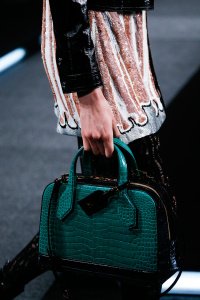 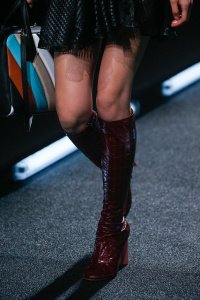 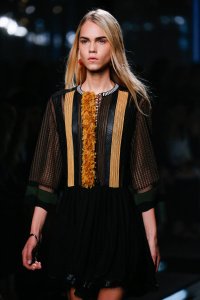 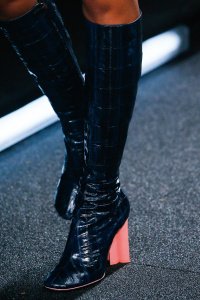 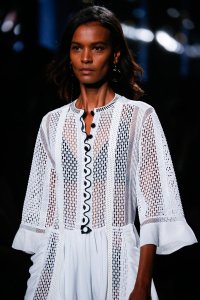 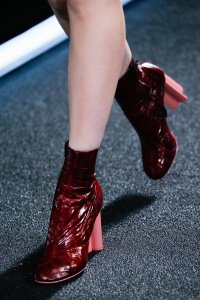 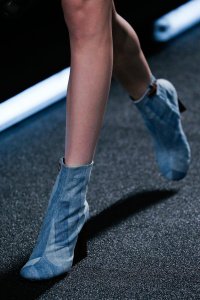 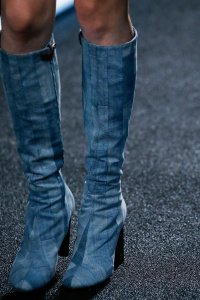 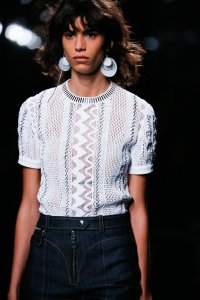 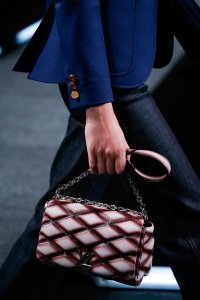 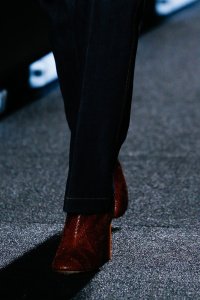 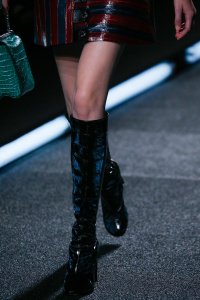 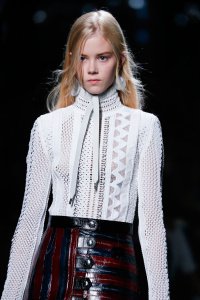 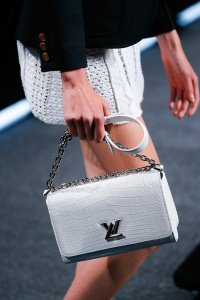 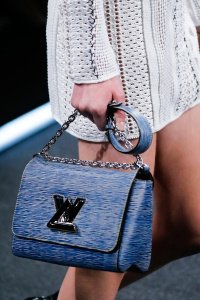