I have just watched the 'The Knight Rises' at the movies and OMFG it is so brilliant!
Christian Bale is a hottie, and Christoffer Nolan really did a great job ending the triology with this master piece!

Anyone else seen it?

What amazed you the most? and did you guys notice all the themes and all the political messages throughout all three films?
D

I saw it! I didnt undersand the ending tho, like was he alive or not? Anne Hathaway was stunning
T

I know I was quite confused too. I think he died. It is probably Christoffer Nolan's twist which was supposed to surprise the audience (and it did!)!!!!!!!!!!
Anne Hathaway did an amazing job, and yes she was absolutely stunning <3
A

I loved it!! lol I got so emotional at the end and I second that Anne Hathaway was incredible, she definitely reinvented the character. It was my understanding that he survived but faked his death so he never had to come back to gotham.
L

I'm going to be watching it tonight! SO EXCITED

I'm not sure if you guys are referring to Nolan's character Ra's al Ghul ... and if you are - he achieved immortality by using the Lazarus Pit (pool of, hmm, "magical" waters which heals you, etc. ... but you go temporarily insane as a side effect).

In Poland we have a premiere on friday!
I'm a total Batman fanboy so if Anne Hathaway ruin it... I will find that b..!
Reactions: 1 user
K

I am such a huge Bale fan. Such a good looking man, ugh.

But I'll be seeing it very soon. My schedule has been busy with the baby.

The Premiere is today here in Switzerland OMG CAN'T WAIT

I enjoyed the movie and LOVED Anne's Catwoman character (so much more interesting than Pfeiffer's). In the past I liked Christian Bale, and he did an awesome job at presenting a conflicted but likeable character for Batman in this installment. However, his personal issues have made it hard for me to find him attractive anymore. All the yelling at crew stuff from Terminator and then the domestic violence stuff... at least he's a good actor so I can forget about that during the movie.

Now, I will say I was a bit distracted by the Colorado tragedy during the movie. There were a few times when a lot of shooting was going on on-screen, that my eyes flicked to the emergency exit and I imagined the horror that must have come over that audience. It took me out of the movie mindset just long enough to make it not such a carefree afternoon 36 hours after the shootings happened...
N

I also liked the movie, but I heard that Christian Bale doesn't want to play Batman anymore in the following movies? Because he was alive in the end. He was in the cafe with Selina Kyle when Alfred saw him. Or am I totally wrong here?

drab said:
I saw it! I didnt undersand the ending tho, like was he alive or not? Anne Hathaway was stunning
Click to expand...

theannase said:
I know I was quite confused too. I think he died. It is probably Christoffer Nolan's twist which was supposed to surprise the audience (and it did!)!!!!!!!!!!
Anne Hathaway did an amazing job, and yes she was absolutely stunning <3
Click to expand...

Nala said:
I also liked the movie, but I heard that Christian Bale doesn't want to play Batman anymore in the following movies? Because he was alive in the end. He was in the cafe with Selina Kyle when Alfred saw him. Or am I totally wrong here?
Click to expand...

Remember shortly before Batman (supposedly) took off in the Bat the drop off the bomb, Morgan Freeman's character mentions that he fixed the autopilot function?
D

SatelliteEyes said:
Remember shortly before Batman (supposedly) took off in the Bat the drop off the bomb, Morgan Freeman's character mentions that he fixed the autopilot function?
Click to expand...

I see where you're going
Reactions: 1 user
N

At first the movie length (2hr 45 min) was a bit daunting, but I ended up loving every second. Normally I tend to get drowsy, maybe sometimes even fall asleep at movies, but with batman I was on the edge of my seat the whole time. Also, the ending was so amazing.
Incase you couldn't tell, I highly recommend it.
Reactions: 1 user
L

I'm probably the odd one here, but I thought it was an okay movie - enjoyable to watch but not particularly brilliant, with poor editing. I feel like Nolan made an epic movie and lots of bits and pieces got cut, affecting the flow of the continuity.

For example, a simple one-liner would've sufficed to explain where the HECK was that prison he was thrown into, and HOW they got there. And also, HOW he managed to travel from the godforsaken prison to Gotham, without it visually apparent that time had elapsed. Instead, it looked like the prison was like in the next town over and he hotfooted it back like a stroll in the park. At least a couple of scenes with him riding a camel/hitchhiking/calling a cab/hijacking a plane to explain how he made it back.

When the part where Gordon found the flare and lit it up and it revealed the Batman symbol on the building, we all started laughing because the idea of Batman sitting around painting the symbol with kerosene, laying the trail down to the ice, somehow managing to predict that 1) Gordon would be caught and 2) Gordon would be sent to the ice, was way too farfetched. I understand the concept of suspension of disbelief, but for a film that is supposed to be a grittier, more 'real' version of Batman, it became more like a cheap visual gimmick.

Apart from those plot holes it was a visual orgasm. Anne Hathaway is SO DAMN HOT in it, and her interpretation was lovely, and Joseph Gordon-Lewitt is too cute!
Reactions: 1 user
S 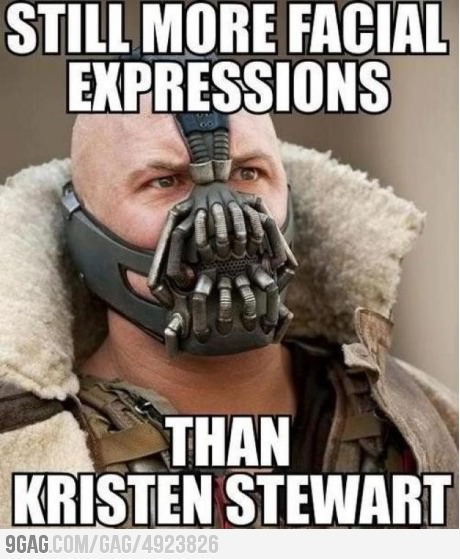 diamondsjoyandcharm said:
I want to watch it soooooo baaaaaad!!!!!!!!!! I'm going crazy here! But I have to wait until my brother's birthday in the 8th... sigh...
Click to expand...

I was probably the only one who didn't like it.
I loved The Dark Knight. And I expected something as brillant, just without Joker.
I expected a lot and was disappointed.


I didn't like the villain. I though the villain's story was weak and their motivation was not convincing. I was annoyed with plotholes. I hated the predictability of every scene "How many times can he try to climb out of the pit? Well, he's sure to fail the first time and the second and then someone will give him a hint". I was annoyed with the fact that every damn dialogue had to end with a pun (and a weak one). Catwoman looked hot but was poorly written and I had a feeling that Anne Hathaway cringed every time when she had to deliver another stupid pun.
I would say, if I was trapped in my city knowing that I might die any second now, I would go batshit insane. The citizens, however, seemed to be quite fine. The cops couldn't leave the sewers but they were well fed, clean, and in great physical condition
Etc, etc.
Bale, Oldman, Caine, Freeman were great as usual.
Reactions: 1 user
S

I think Tom Hardy did a great job. I didn't expect him to be anywhere as good as Heath Ledger but he surprised me. He didn't have his face to help show the character and tell the story, but he did so much physically - you saw who this character was just through his movements.