Orange is the New Black

Anybody watched this? I just started on the first season, really like the first couple episodes - it's hilarious! Although it makes prison life seem like a Brownie camp.

Crazy Eyes crack me up every time she appears.
V

I've only seen the first episode but I quite liked it worth continuing with then?

omfg @lechevrefeuille, are you me?! haha I just started watching this LAST NIGHT and saw your post now.

It's entertaining, it's like a less intense, sexier prison break (well as in it shows more flesh since it's girl on girl a bit...)...without the break part I guess because it goes into the flashback history of the inmates.

I think I am on episode 4...I am going to continue watching it tonight. The lead girl, Chapman, has a decent body. hahah I liked her 'juice fast' flash back & the skinny references ( you look all nice and cheekbony...that's because they are starving me out) or something like that...

I think it gets better after the pilot. Sometimes pilots are great and sometimes they are bit awkward. It thought this one was so-so, but now a few episodes into it, it is pretty good. I'll have to see if the later episodes are still good though....
Last edited by a moderator: Aug 16, 2014
E

I truly enjoyed this show and can't wait for the next season to pop up on netflix. There is an aspect that gets a little too high school drama in my opinion, but there are some episodes that are pure genius. Some great raw acting moments. I would love to read the book. The show is based off a memoir the real Piper wrote. NPR did a cool interview with her.

I'm on to ep 11 - I love how Netflix just releases all 13 episodes. No waiting all week for a new one, I can pick when I want to watch. The bad thing is having to wait till next year for the next season!!

Anyways I just want to rant about Daya and Bennett's relationship. It's so stupid, I want to hurl something at my computer everytime it's their story and that stupid sappy music piano refrain starts. I don't want to spoil anything, so I won't say anything else, but damn, their Twilight shit "romance" has got to be one of the worst things ever. Bennett is hot and so damn cute with his stupid ass cute face and tight bod. Daya is a fat, floppy plain-as-corn chubster whose only "cute quirk" is that she draws manga (badly) and is one of the younger inmates. But both of them are as dumb as a sack of bricks with a combined IQ of a muskrat.

On the other hand, MORE CRAZY EYES!!! I totally want to see her backstory, it's so interesting, with her Shakespeare-quoting craziness and her parents, plus her crime wasn't explored at all in S1. I'm not even done with the whole season and I'm already wet for the next one.

The episode with Laverne Cox, the transsexual actress, playing Sophia had me in tears. Really good directorial work by Jodie Foster. And Taryn Manning's performance was excellent as the nutjob meth head messiah - give that woman an Emmy. The stories are so believable too - SPOILERS - highlight to read there's the high school track star who only wants to feel romantic affection being led astray and betrayed by the wrong boy, the teenaged runaway who gets messed up with drugs, the girl who's been in and out of institutions her whole life with no outside support that the moment she is released, she commits a crime just to return to the comfort of prison and her friends inside, the yogini who shot a child entirely by mistake and is living in constant guilt. You could be any one of those women (well, except for Taryn Manning's character, she's so out there). Even if you're from a privileged background, even though you're surrounded by criminals and you ought to know better than to follow in your criminal mother's footsteps, one mistake can get you into prison. And that is why I find this show so compelling.

I finished all 13 episodes in 4 days! Now I too have to wait until season 2...wah. I have to say I really like Laura Prepon in this show (& basically ALL of the actresses are really fun to watch!). I like her as a character actress (I give more slack to actresses about weight since I figure they need to play a role and I think she does it well here). That being said, she'd be even more amazing if she was thinner (any heavier she may get into BIG & tall territory....but she's not there quite yet, thankfully)

Also, am I the only one who thing Poussey is both beautify and adorable and sort of looks like a female version of Pharell Williams?

(Also side note, it took me forever to realize "Red" was the actress who plays Captain Janeway on Voyager, Kate Mulgrew, I was so sold on her as "Red" It took me 10 episodes to put 2 & 2 together from the opening credits! I guess that speaks well of her acting range!

Overall, the casting I would say is pretty good the characters are what keeps the show interesting. The true test will be how good season 2 is...let's see if it is going to go down hill very quickly with a crappy story line or build some good momentum.

Daya is a fat, floppy plain-as-corn chubster whose only "cute quirk" is that she draws manga (badly) and is one of the younger inmates. But both of them are as dumb as a sack of bricks with a combined IQ of a muskrat
Click to expand...

Yeah, that story line is lame. Also, her 'mom' is hotter HAH!

I love Orange is the New Black! I love Crazy Eyes and Tiffany. Honestly, I really like the characters in the show and I'm not talking about the main character (Piper). I love seeing all of their stories (especially Tiffany and how she became the crazy God lady).
I can't wait for season 2!

I like this show! I especially like the flash backs, I am really curious to know what each character's story is. At the same time, the show can be pretty gross sometimes (the tampon scene?)

Laura Prepon is the reason I watch this show

I've gotten hooked on this show. I was working on a project this weekend and totally sat through the first four episodes while sewing. It is really addictive...

I love this show and I am totally addicted! I don't really like her husband though, and her "best friend" is kind of a whiny bitch.

I'm IN LOVE with this show! I finished all the episodes in just a few days, and I've been waiting for season two ever since...

Like others in the thread, I can't stand Daya! WTF is up with her manga drawing? How is that even appealing?

I don't want to spoil anything, but I'm still holding on to the cliffhanger from the last episode! It's driving me nuts!
C

pterodactyl said:
Also, am I the only one who thing Poussey is both beautify and adorable and sort of looks like a female version of Pharell Williams?
Click to expand...

I'm dying right now. I totally agree with you.

Also, I loved this show--definitely binged watched all the episodes and am now stuck waiting for the second season which doesn't come out for like another year I think. And I'll go ahead and say it, I think Piper is kinda hot, not gonna lie.

FAKE Trailer (TEASER!) is here too:

I binged-watched the whole first season in 2 days, and I want to do the same with the second! I hope it gets more of an arching storyline though (although I guess the point of it is to say that prison has no storyline, you just take it day to day)
B 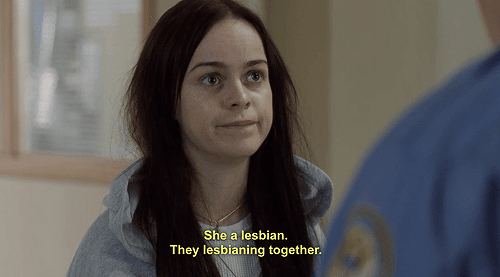 That made me LOL.

FAKE Trailer (TEASER!) is here too:

!!!! so excited!
I'm definitely just going to binge watch it in a day--oops.

I had no idea until recently that the tv series is actually based on a book.

Miss_Skinny said:
I had no idea until recently that the tv series is actually based on a book.
Click to expand...