I think my body frame is medium. So I tend to look bony even with extra fat (mostly on my boobs and tummy). At 100 I'd probably look really cute and tiny in clothes, but look like hell naked. =/ If anyone has any suggestions for that I'd be forever grateful.
A

SatelliteEyes said:
To clarify (from my perspective), nobody here is saying you ought to fit this or feel bad if you don't. It's just noteworthy that a lot of members have goals that lie pretty perfectly within the chart.

So please don't feel crappy if your goal is higher! Body frame does make a difference, as does muscle mass and all that jazz.
Click to expand...

So true! While I would love the scale to say something lower, I know if I go too low my face will look gaunt, especially at my age.
A

tinyowl said:
So I saw this picture on Tumblr when I was creeping on some random blog... 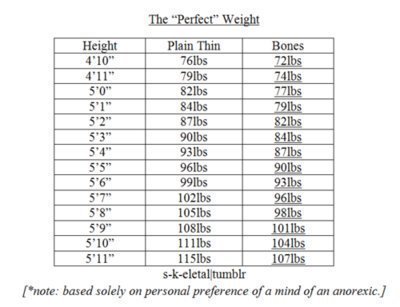 These figures are definitely subjective! I have a pretty small frame (runs in the family) but even 93 is a little too low. 98/99 is the minimum i can go down to without looking sickly.
X

When I was at 120 I feel like I looked basically the same that I do now.
When I was bigger though I always had it in my head that I had big bones.
I feel like inhale some strong heavy bones though.
I measures my wrist once and it's 2 inches around which is "small frame, ectomorph type"
I took pictures from beginning at 185 then when I got to 160 I decided to take pics of every ten lbs and every ten looks like a big difference until I look at 120 to 110 so it's weird! I see no difference whatsoever which makes me think that I should just eat a little more and give myself more freedom but I'm so determined to get to 100 it's insane! I don't think I look that thin now! I look like my avatar basically which I think is thin but not super skinny.

I'll let you girls judge me when I get to 100 and post my pics.
I reeaaaally do want those double digits tho! 99! Just to see it once on the scale for a split second would be awesome!
For now tho I don't feel like I'm where I want to be

Apple said:
There are lots of charts like this on tumblr based on people's opinions. I don't think you should feel bad if you don't fit into it. Here are some other examples, some that involve body frame like @aliie mentioned: 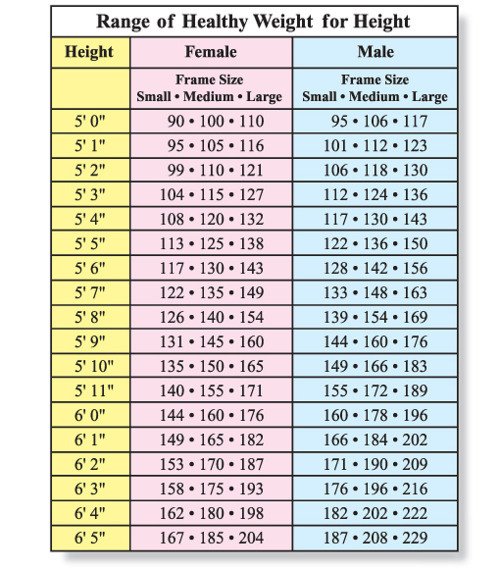 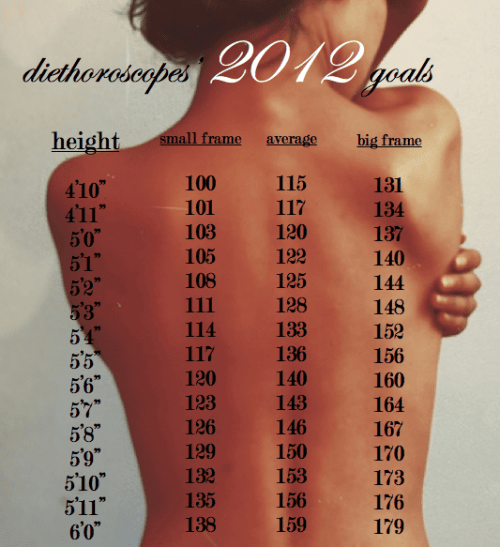 Hmm, I think the "bones" list is accurate but my idea of "plain thin" applies to a bigger variety of weight because some very tiny girls can pack on a lot of muscle. I have a lot of 5'2"-5'4" friends who I think are very thin but since they do a lot ballet or yoga/pilates they are usually between 100-110. Since they are so healthy and their bodies are such a perfect shape I couldn't imagine them losing 20 lbs to make it onto that chart unless they just stopped working out.

Does this make me beyond anorexic then? My GW is even lower than the "bones" stats!

No way in hell would I be bones with 82 pounds on me though.
F

I'm between two heights but I think 115 (the higher end) would be perfect. now just to get there & reevaluate
S

This chart is more of a skinny ideal chart. Not necessarily a healthy weight chart
C

I'm 5'3 so 90 lbs seems like a good number to me but 84 lbs is too low for me. My bones already stick out and it hurts when sitting so it would hurt like a bitch if I were 84 lbs.

But remember it's up to you on your perfect weight

I think this is pretty accurate too. I have a new goal . Thanks for posting this.

OK that matched my goal weight exactly! Right between 5'1 and 5'2

TinyOwl said:
So I saw this picture on Tumblr when I was creeping on some random blog...

I know the footnote says "solely on personal preference of a mind of an anorexic"... but I think the "Plain Thin" stats are actual about right, and you definitely can achieve them without starving yourself. Maybe the "Bones" stats are the absolute minimum weight I'd personally want to be.
Click to expand...

i guess I need to evaluate my UGW and I guess this is why I currently don't look skinny. Thank you for sharing

, but i also think body composition should be taken into account (as in, i wish a few more of those 99 lbs were muscle and not fat).

although i don't think many people would look good on the "bones" end of the spectrum, i have a pretty small frame and i think 93lbs might look a tad too thin at 5'6".
H

Wow, I've missed this post ---BUT, at almost 5'11 that sounds right to me. I've been 110 before and was almost pushed out of school for speculation of an eating disorder, so her bones numbers are very debatable.
N

This is actually pretty accurate. It reaffirms my goal weight .
M

I don't even know if I have a small frame or not. x.x I'm as tall as @fuhhletch is, and our weight is pretty much the same, but I look WAY fatter... lol.