I'm sure a lot of you have seen the pictures of Megan Fox and know that she gained weight. I actually didn't realized she gained that much !

What do you think?

In the Amica interview, Megan once said, “For a year and a half, until about four months ago, I followed a strict vegan diet based on raw fruits and vegetables, no bread, sugar and coffee."

There are a lot of blogs, where people comment on her weight gain, saying things like: " If anything, I think Megan looks wonderful with an extra ten to fifteen pounds – it fills out her face a bit, and makes the tweaking look softer."

I don't know what to say... what's wrong with those people?? She looked way better before!!

She was perfect before! I love that look before the "too skinny" limit and she was perfect, nice legs, arms and everything balanced. Now her shorts seem to be screaming because they're being stretched as hell.
Reactions: 1 user

her face was so tiny in the before pic too! perfectly balanced proportions- she's pretty short too. in the 2nd pic she looks really chunky. you can really see the weight gain in her thighs.
P

I loved her skinny, just that her boob area didn't look good.
But Megan changed in other ways also. Either it's plastic surgery, yoyo-ing or she just "lost it". Her face doesn't seem so attractive anymore.
F

I always loved that photo of her in her stepson's tshirt, so jealous! 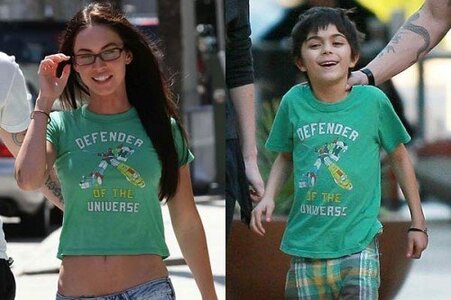 And I know it's a little cliche, but she looked amazing in Jennifer's Body. I wonder why she gave up the diet?
T

Look at how her legs have expanded ... gross!

Oh my....this makes me so sad! She was perfect, why'd she have to ruin that?!

Maybe after going vegan so long, she needed a break? She does look nice, though.
A

How tragic. She use to look so perfect (imo). Wonder if she stopped training with Harley Pasternak? Her and Amanda Seyfried started getting nice and tiny (Amanda's arms and legs did anyway) when there seemed to be picturesof them going every day.
L

Oh Megan! She used to look so beautiful and now she looks average

maybe she's trying for a baby? she is married isn't she?
S

Why oh why would she gain weight like that?! She was in perfect shape!
S

Woops, I must have completely missed out on this - I had
no idea she's gained weight at all. The picture in flip flops
is pretty sad
A

Isn't it kind of ironic that I find her sexier when she was skinnier?
S

She looked way sexier before than now.
Btw, looking at her before-pics, she never was "too skinny". She was just right!
IMO, she´s just seeking attention by complaining how she had to lose weight for this one, and had to gain weight for this other role. She even said, her hair fell out when she lost weight for "Jennifer´s Body", I mean, she was skinny in that film, but not in some dangerous state!
K

She looked amazing in Jennifer's body
Click to expand...