classichic said:
You're making me want to marathon friends, maybe in two months time. I actually watched the one with the Rumour the other day, with Brad Pitt. I can't wait to marathon some tv shows, so much to catch up on.
Click to expand... 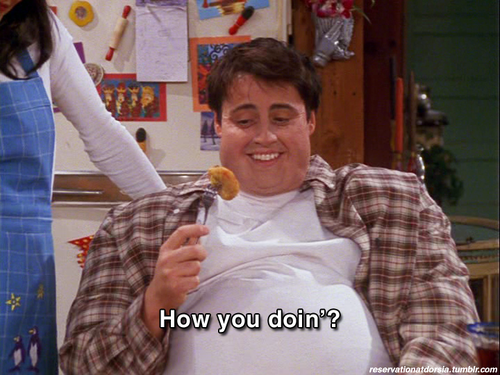 Oh I remember the Brad Pitt episode. Good one.
Friends is hilarious! We should make a thread with funny quotes from tv series or movies.

When I was younger, I never really was a fan of TV series...I don't even know why...until I discovered The OC (way after it came out...) and then I watched all four seasons in about two weeks. From time to time I wanna buy the DVDs as they're not as expensive anymore...

What I regularly watch now is the british TV Series 'Merlin' and 'Once Upon A Time'...I'm a sucker for some magic... (hence I love Harry Potter...) aaaand of course The City and The Hills!

AAAAAND The Vampire Diaries. I'm currently watching the third season every evening because I wanna catch up when season four airs in Germany (neeeeext week!!) and I looooove it.

And sometimes I watch Navy CIS...that's quite a break though

I did this with Friends and The X Files. And also the first two seasons of Breaking Bad, I had missed them on TV and catched up within two weeks. Best TV series ever!

I'm doing it with Nip/Tuck right now! I've done it with Skins, Gossip Girl, and Supersize vs. Superskinny. I'm going to do it with Sex and the City, Mad Men, Breaking Bad, and Game of Thrones this summer. I love marathon watching so much more than regular viewing. I think I can kind of lose interest when I have to wait a week for the next episode, and this way I get instant gratification!

I am 100% guilty of this as well....Not all of them are OLD series, but here are a few series I have watched recently (as in the last 12 months)

Last year was a bad year for me though so I needed to numb my brain by watching tons of TV apparently. I even arranged for a bi-coastal TV series marathon with my friend so we could chat about a series together like we use to (see below story)

This year I am attempting to be productive however (well getting back on track at least), so I'm cutting back on too much TV & internet. I have to even cut my time down on the forums a bit, but I'll pop in here & there

Of course. How else do I sit beside my friend on her bed and stare at her laptop screen for twelve hours straight.
Click to expand...

I totally relate! I use to have long tv series sessions with a roommate & when her boyfriend came over was like wtf...why are you too sitting on the couch in pj's crying & watching TV!! hahah good times. Let's not mention the time I had to bring a dvd (may have even been a vcd...hmmm long ago) to school to try & watch in a computer lab since I was towards the end of a 30-episode series!

I am so guilty of this. Once I start, I can chain-watch them for hours. I get them online for free

I have done it with:

Also I have done it with ones that have started this year that I missed the first 6-10 episodes:

Planning on marathoning Pretty Little Liars because I don't think I could deal with the suspense of waiting for the next episode.

Other shows I've marathoned are George Lopez, Everybody Hates Chris, and That 70's Show.
C

I watch anime and currently I am watching new series for which I have to wait a week for one episode! That's torture to me. I'd rather watch an entire series in less than a week.

71000 said:
Planning on marathoning Pretty Little Liars because I don't think I could deal with the suspense of waiting for the next episode.

Other shows I've marathoned are George Lopez, Everybody Hates Chris, and That 70's Show.
Click to expand...

Planning on marathoning Pretty Little Liars as well. I already watched a few episodes, the girls are all a bit of drama queens though

I'm a major binge viewer... Better than a binge eater though, eh?
Shows that I have binge watched:
Gilmore Girls (this was the first show I binge watched)
How I Met Your Mother (6 seasons in less than a week)
30 Rock
Sex and the City
Parks and Recreation
Drop Dead Diva
Biggest Loser
Wizards of Waverly Place (I was lame/I still am lame)
Law and Order SVU
Sister Wives (I live in Utah...)
Gossip Girl
Along with Shark Week (I LOVE Shark Week)

Right now I'm binge watching:
Arrested Development-New season coming out in a couple of weeks (I should be finished in no time haha)
Vampire Diaries-I watched the first 2 1/2 seasons quickly but have slowed down because I will have to wait to watch the 4th season til it's on Netflix (I've been known to spend a ridiculous amount of money on amazon buying
the episodes from the season that aren't on netflix yet)

I will probably watch Friends and Supernatural next.
Show hidden low quality content
You must log in or register to reply here.