So the last post that 71000 commented on store collaboration with celebrity got me thinking on designer collaboration with stores for a cheaper collection.
It also reminded me that ages ago I had an appointment early morning and I saw a long queue outside H&M before the store had opened. I think it was Versace for H&M, I can't remember. They had guards to control the crowd. I was actually surprised because this was quite early in the day. Anyways, I normally don't go into H&M but since I had time to kill I went in, (normally H&M is too crowded but since the shop was deserted afterwards I thought why not) but most of the stuff was gone and the stuff I saw looked tacky/cheap. I just assumed these were the left behinds and the good stuff was gone. Anyways there's more and more designer cheaper lines. I haven't seen any of the stuff for Target but I saw Marni for H&M online and I wasn't impressed. From what I've heard, the stuff gets sold out within days. So what are thoughts on designer collaborations? Do you have any of the stuff? Do you think they should just stick to high end stuff?

I think there's loads more but these are the ones I can think of.
Neiman Marcus for Target
J

I think it's a bit of encouragement towards brand worship over true taste in fashion. People want a piece of Jason Wu or Missoni just so they can tell themselves I own Missoni. Of course, there are people who truly like the designs and buy it. Recently, a coworker of mine had her friend from upstate NY go to Target at like 6am for her to get pieces from the Prabal Gurung for Target collection. I think she was more on the end of "I own a piece from Prabal Gurung" more than anything else. Especially since one of her purchases was a pair of black flats. -.-

I never had a chance to check out any of the designer collabs w/ H&M in person because none of the H&M's in my area had the collections. I was intrigued by the MMM x H&M collab but I ended up not ordering anything online because most of the pieces I wanted were either sold out or not worth the price.

I bought a few things from the Prabal Gurung x Target collab on Saturday. It's obviously the quality you'd expect from Target, but the price range was quite decent. I think the most expensive thing was a leather jacket that was $200. The shoes and accessories were all sold out at my location. The solid color dresses and the multicolored floral prints looked really cheap and juvenile from close up. I didn't bother trying them on though, so they might look better when you're actually wearing them. I ended up buying a B&W floral print skirt for $30 & matching top for $25.

This is the top 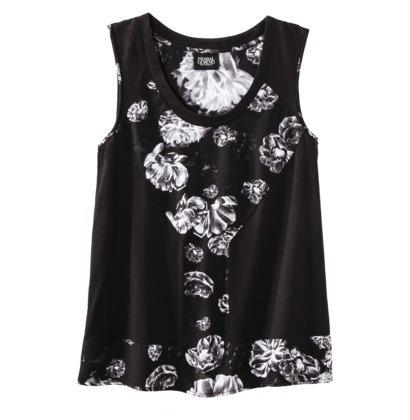 and this is the skirt 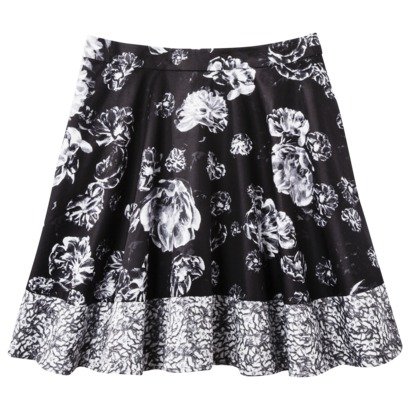 They look better when I'm actually wearing them than in the pictures. I love both pieces. They don't look good together, but they can be dressed up/down easily with other separates. I think it was a good investment because I can wear them pretty much anywhere. I wore the top with skinny jeans and strappy sandals from home and it looked so good. The skirt also flares out really nicely, so if you have large thighs but nice calves, this is the skirt for you.
B

A lot of people do buy the clothes only to feel like they own something by X designer. That's not true for everyone (I wanted to buy dresses from Jason Wu for Target because those kittens were so adorable but stupid Target does not ship to Peru, and I know people who have no idea what Missoni is yet liked Missoni for Target), but I have heard some very confused people saying that because it is a design collaboration suddenly the quality is couture-worthy or it's a luxury item or something.
Last edited by a moderator: Aug 16, 2014

I don't think it's a bad thing that the designers choose to create something for the masses, because the designs are (from what I've seen) somewhat different from the actual higher priced goods, asides from lower quality.


Jocondette said:
I think it's a bit of encouragement towards brand worship over true taste in fashion.
Click to expand...

I love when people share their outfit of the day and they're like...
Blazer from Zara
Shorts from Forever 21
Beautifully designed shirt with lace from Lanvin
... for H&M

I find it sort of ridiculous though how certain people buy a lot of stuff quickly and it ends up being sold on Ebay for insane prices.
M

Overall, I do like the designer collaborations though. It gives the populace p) a small bit of the feeling of owning a designer piece. Even though it's not even the design that speaks, or the quality, but the tag. And do they care? No - if Karl Lagerfeld says it's fashion, then it's fashion - they don't care if it's ugly as hell, because if you don't like it, ''you probably don't know fashion.''
But then again, should we care? If they want to walk around in t-shirts with Karl's fatty-hating face on it, and thinks it's ''soooo high fashion'', they should. If it makes them happy to own such a piece, they should probably make themselves happy. Still, it's a piece designed by Karl Lagerfeld and for all the chanelophiles, that's the holy grail.
And the others, the ones who actually care about the designs itself, should ask themselves if they are never ''blinded by the label''. I think we all succumb to that at least once. 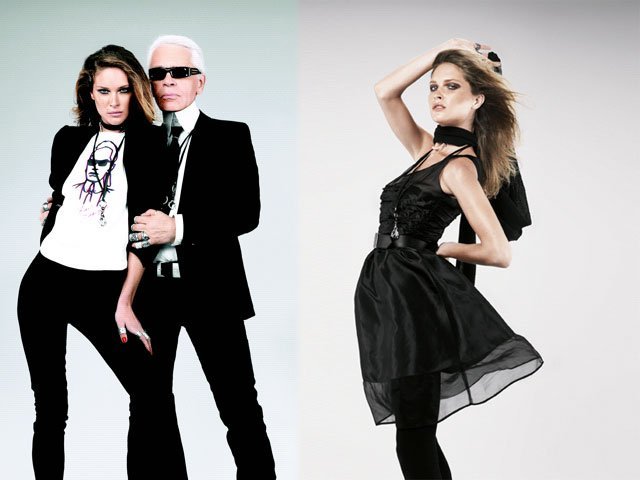 I was so excited when Karl did his line for Net-a-porter but was somewhat disappointed. Didn't really like much of the stuff.
I agree that some just want to own the stuff just because of the name attached to it, and don't know anything about fashion but this is the same with high end stuff. Owning something because it's popular or has a name to it i.e. Tiffany, Louis Vuitton bags, Jimmy Choo, Christian Louboutin shoes etc.
At the same time I do kind of like the collaborations, just because I think it gives some of the girls the chance to buy the stuff they want if they otherwise couldn't afford to do so and also it's different from the main stuff.
Personally I'm not fussed on designer items. I love buying cheapos if it's nice but I don't like compromising on quality. For me more than anything is the quality of the garment. But, I would love to see Designers do a collaboration with another store rather than H&M or Target.
P

I tend to go for pieces that I like rather than who it's by and have no issue calling something ugly if it is. Doesn't matter who it's by.
Some collaborations are horrific. Others are amazing.
As for the Karl collection? Although some pieces aren't great at all I am sat here writing this in my underwear and a Karl tshirt. I adore his illustrations.
S

h&m did tons of collaborations, like every year, they had a guest star, even karl lagerfeld did a small collection for h&m... Personally I liked the campaign of Lanvin x H&M and the pieces looked pretty good but I didn't buy anything because all the pieces I liked were sold out...
Anyway I think that these type of collaborations are good for people that can't afford the "real" ones.

Bumping this because Australian Target released the Missoni collaboration only yesterday. The website crashed immediately (it took over 24 hours to return to operation).

The lines were ridiculous according to the media.
I actually purchased some pieces but only because I liked them and they were quality fabrics. $30 for a 100% cotton vest, $50 for 100% silk singlet etc. I wouldn't pay $50 for a polyester singlet regardless of the designer.
I saw people fill multiple trolleys worth of stock and one woman had each of her children (even the really young ones) standing guard to their own trolley so she could stock up.