Story from the Daily Mail:

It's been a week since androgynous model Andreja Pejic came out as a transgender woman and after a long wait, she's now opening up about what she describes a 'life-saving' decision.

Andreja, 22, underwent sexual reassignment surgery earlier this year to transform herself from a man to a woman, a move she's been planning since the age of 13, and although her looks haven't changed, her sexual anatomy - at last - has.

'Now I can stand naked in front of a mirror and really enjoy my reflection,' she told Style.com. 'And those personal moments are important.'

Born in Bosnia in 1991, Andreja - who was born with the male name Andrej but has since added an 'a' to feminize it - grew up with her family in Australia, and was discovered by a talent scout while she working at McDonald's; kicking off her highly successful modelling career in 2010.

In America, which she says is less 'progressive,' Andreja has worked primarily on the male board of her agency DNA, whereas in Europe, she has been on both male and female boards.

'I told my men’s agent [in New York] about two weeks before the operation,' she explains. 'Because I didn’t want anything to stop me.

'And then recently, I had a meeting with the women’s [team], and they’ve been very positive about moving from the men’s board to the women’s board, which is amazing. It’s something I guess no one’s ever done.'

It is unclear whether or not Andreja plans to have breast surgery, but for the stunning six-foot-one blonde, her sexual reassignment surgery marks a major milestone is leaving all traces of manhood behind.

The only time in her life when she embraced being male, she says, was in her pre-teens.

'I went on sort of a boyhood campaign from age nine to about 13. I felt like my options were either to be a gay boy or a straight boy.

'I didn’t feel that I was gay, so I didn’t know that there were any other options until the age of 13, when I went online and discovered that there’s a whole community of trans people out there.'

'Particularly when working with cosmetic brands or perfumes or those sort of commercial, corporate things,' she reveals. 'It’s been more difficult. They don’t have any market research, and people in that world aren’t risk takers.
'You have to prove to them over and over that you are liked by people, you have a skill, and you can sell a product.'

It's not a problem, however, that she is facing with Hollywood. Andreja has just bagged herself a role in director Sofia Coppola's upcoming film adaption of The Little Mermaid, playing one of the lead character's sisters.

For the model and now actress, who says she is currently single but 'open to love,' her message to fans is simple.

In a statement she posted to Facebook last week when she first broke the news, she wrote: 'As a transgender woman, I hope to show that after transition (a life-saving process) one can be happy and successful in their new chapter.' 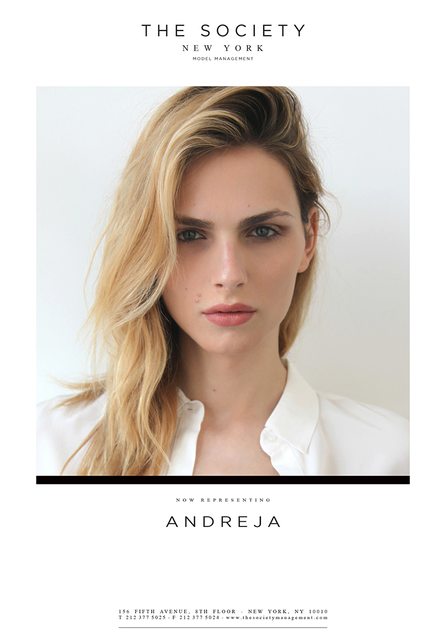 Survey reveals that bullying is "the norm" in the fashion industry

Anatomy of a Magazine Cover